Occasionally I see a new article showing “hidden gems.” Which is basically very good video games, but they never blew up. A lot of the time those games are indie games. I’ll be talking about what I feel like is a hidden gem called. A Short Hike, made by Indie developer Adamgyru.

A Short Hike is about a bird hiking up a mountain to get cell phone reception, trying to help others around her, making many friends along the way, fishing, racing, playing beachstick-ball, and collecting shells. There are so many more activities to do you have an entire island to do basically whatever you want.

Because the game is so simple it’s easy to find out what you can do control-wise, and the other animals on the island give you plenty of tips to help you find things to do. Also, since the game is so straightforward I would recommend this as a good game to help someone get into gaming.

At first, the game may look strange for the unique art style and graphics, but I quickly found them to be beautiful and at much uniqueness to the game. I also found it helped immerse me into this world. Which made the game ten times better. The game also has amazing music that subtly changes as you do different activities, which also does a good job of immersing you in the game. 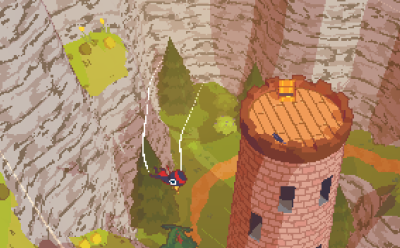 I am sure that some of you may be wondering about replayability, I found as I played the game that it was big enough that if I wanted to play it again in around 6 months I would experience around the same amount of fun and excitement. That being said, that is really just my opinion and definitely will vary person to person.

I’d like to touch on one more thing before I conclude. This game is very peaceful, I found that when I played it and didn’t worry about reaching the end I was able to really enjoy it and actually destress.

So if you ever need to ever get away from games that stress you out, or just want a nice peaceful game with lots of things to do and that is different from most games out there, A Short Hike is for you.