I have never played an entry in one of my all time favorite video game series, Dragon Quest, until recently. After seeing the massive success of the series in the west, and hearing from players that it has a character similar to the protagonist in Dragon Quest: Rocket Slime, I had to give it a chance. My expectations were about as low as Breath of the Wild for the latest game on the Nintendo Switch. Those expectations were completely met as Dragon Quest XI S: Echoes of Elusive Age - Definitive Edition single handedly invents a genre, questions it, counters the norm, and redefines it, all within the first 30 minute cutscene.

In case you’re in the top 1% who have never played a Dragon Quest game, I’ll explain the core gameplay. Rich exploration is featured throughout the vast land of Erdrea, which contains collectibles, items, and monsters that you have to defeat through turn based combat. To do so, you press up and down on the controller. 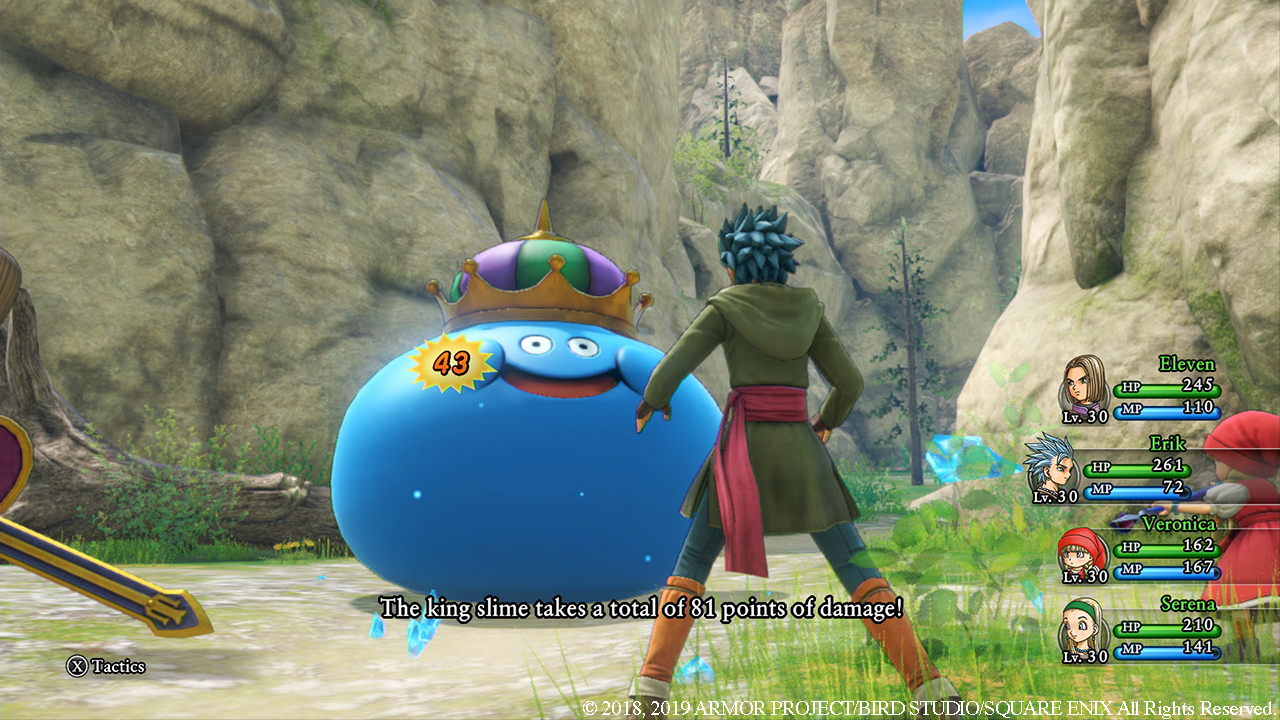 You may be overwhelmed right now, but that’s not even half of it! During the battles that start right where you encounter monsters in the overworld, you can use the control stick to run around your team and monsters to look awesome, like the guy in the anime with his arms behind his back. This running mechanic even translates into exploration, allowing you to avoid monster encounters, eliminating any needless gameplay or XP gains.

There’s even a lot of quality of life features to make the game be over faster. Different speed options and auto-play ensure that anyone can move onto a new game in no time.

What can I say? It’s Dragon Quest, which we have all played before. 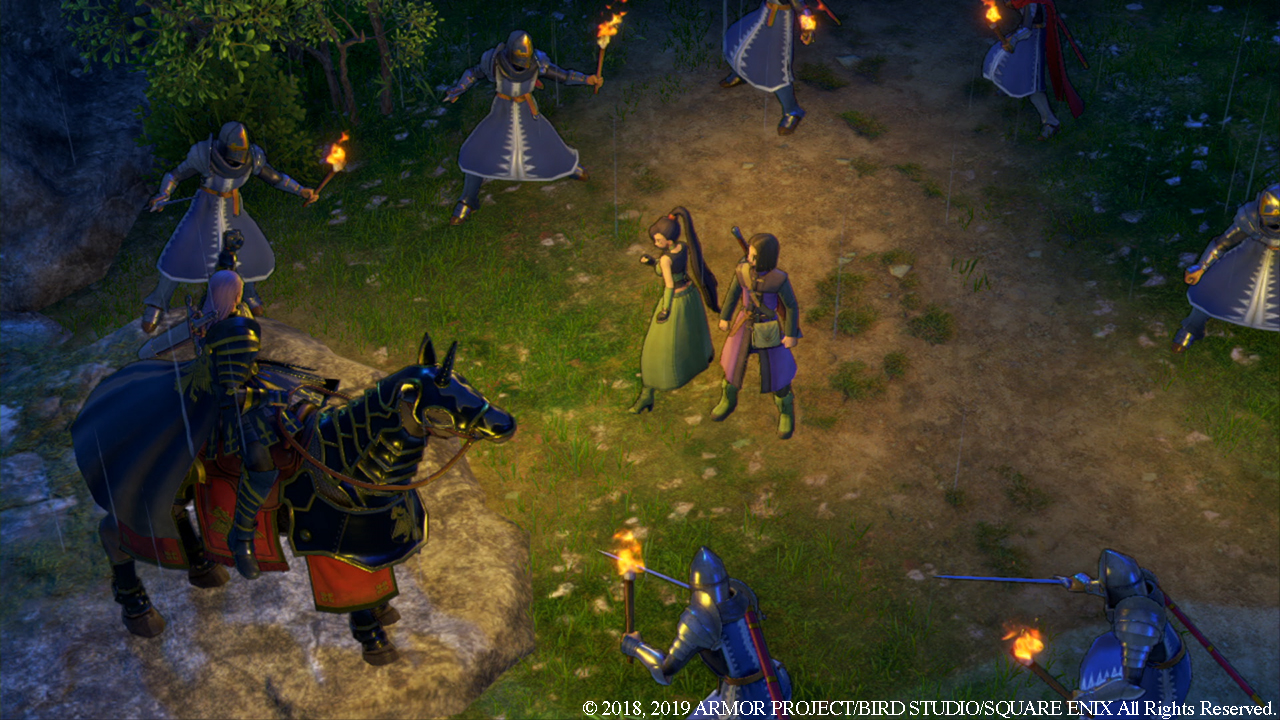 From the very beginning I knew that Dragon Quest XI would feature a story like nothing else. Right off the bat, you meet the boy, a dog, and a girl. Together they discover that the boy is the chosen one and may or may not be the one that saves the world. In order to avoid spoiling the best plot ever written, I will let you discover that he is indeed the Luminary of Legend for yourself.

Joking aside, the cast featured within is objectively the best set of characters in any video game. Everyone has a distinct personality, development, and gameplay style that made me fall in love with each of them and pushed me to want to use each character in every battle just to witness their charm. But that’s enough about Fire Emblem: Three Houses. The characters in Dragon Quest XI are kinda cool, but I’m pretty sure the game is on PS4 and I’ve never played PlayStation All-Stars, so I don’t fully understand the appeal. Some guy named Sylvando, a circus performing NPC, is the overall highlight, which unfortunately distracts from the grandpa who knows martial arts.

At this point, you might be thinking, “Wow, it seems like the Switch has another great game that makes its library even better.” But stop that. This is a port of a PS4 game. That stands for PlayStation 4. It is not a Nintendo exclusive, and however impressively done the graphics and incredible orchestrated soundtrack are, it does not contribute to making the Switch better than everything else--quite unfortunately. Unlike other versions of Dragon Quest XI, the Definitive Edition features music that is fully orchestrated. This really breaks immersion because I cannot see the instruments being played, so it feels made up, like the game is making fun of me for having ears. Luckily you can switch back to the digitally rendered tracks and move on with your day.

Something about this game screams “quality”, echoing from every corner of its elusive ages. It is clear there was a massively high budget and production value that went into its creation, and that quality is stretched all across its plethora of quantity, making every hour feature something new and simply grand. I do not know where these small independant developers acquired the money they put into this new IP, but I suspect fraud; perhaps they may have been siphoning money from AlphaDream for the past decade.

Now to answer the question everyone is probably asking, “If this game is so good, why should I even play it?” Well, why should you play any game, really? You might consider yourself a ‘gamer’ because you enjoy playing video games. Maybe you started when you were a kid, maybe you got into gaming after discovering it recently. However you enjoy the hobby, you are right in doing so. Games can provide a healthy escape and pass on unforgettable experiences in a package that are always marked as “fun.” Fun, the magic item that always seems to define video games. If it’s not fun, you probably won’t want to play it. In other forms of entertainment similar to games like movies and literature, people find fun in consuming it, but the media itself is not always designed to be fun at its core. I think this same idea translates into games. They do not always have to be fun to play. They can exist as an artistic expression the same as other media, and if executed correctly, it is completely fine for a game to be not “fun.” Eventually, even fun, the idealized feeling every game strives for, can be too much. I believe that most of us have reached a point in our gaming careers where we start to get bored of each game we play, seeming like the medium has lost its grasp and the once flaming passion for it is fleeting by the day, as each new, critically-acclaimed release deepens the worry in your heart that you may never enjoy it, or anything, again. This always passes, as we eventually find games we love, that completely consume the daily thoughts and provide something to look forward to after the daily tedium of work or education. We all deserve that feeling of the game that completely sweeps us off our feet. Luckily, Dragon Quest XI is the exact opposite of “not fun.” It is truly video game comfort food, even if you aren’t hungry, you will eat this and enjoy it, but maybe feel some guilt within the first twenty hours for doing so until you realize unhealthy garbage might be the best taste that food has to offer. And thus, to answer the question, maybe, just maybe, trying a game like this will convince you to once and for all put down that controller, and go outside.

I proudly give the definitive edition of Dragon Quest XI a perfect 7 for the mind-blowing masterpiece that it truly is. The medium has peaked, and I for one, hope Square Enix never produces another RPG, as it will only feign glory over the unparalleled triumph that is Dragon Quest XI.

The content of this review is intended as satire and does not reflect the opinions of the author, nor is it intended to evaluate this video game. Dragon Quest XI S is a beautiful, content-loaded game that would be worth any RPG enthusiasts’ time, and may even convince a newcomer to the genre or series that questing for dragons is pretty cool after all.