E3 is an important time for anyone involved in the video game world. It is often described as the "Christmas of video games," and is something that most gamers look forward to with awe and wonder. E3 is the time when we find out what games or game consoles we'll be saving our money for in the coming months (and sometimes years).

It's been a full week since E3 ended, and we've had plenty of time to digest what we saw there. To summarize our thoughts, we've compiled a list of what the most important games were at E3 for the LDS Gamers staff (eight staff members were surveyed); here's what we'll be saving up for.

What is your most anticipated game from what was shown at E3 this year? 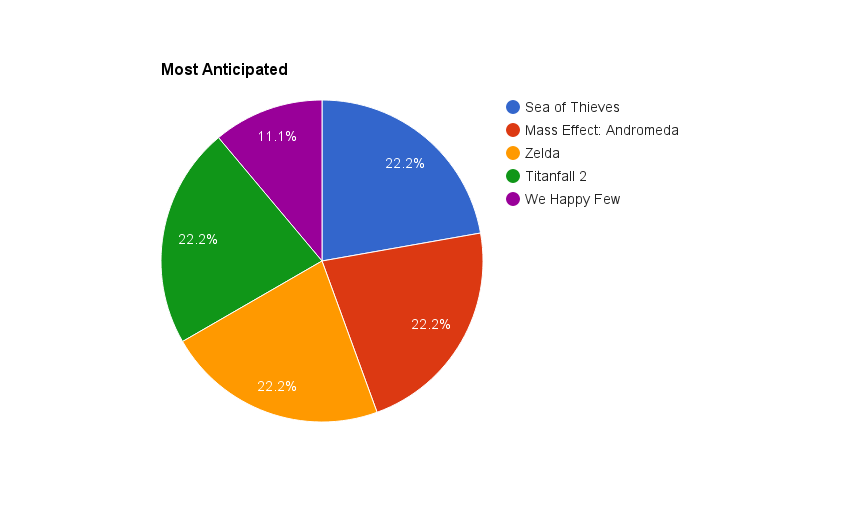 What game surprised you the most? 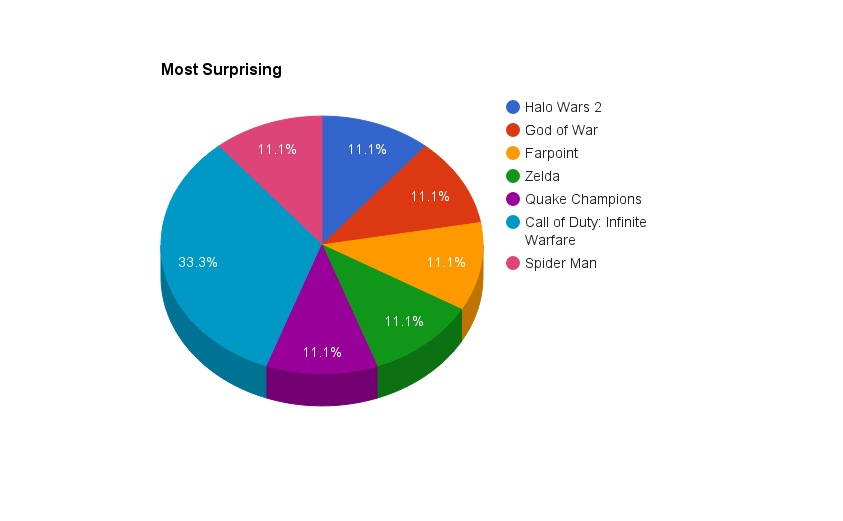 By which game were you the most let down? 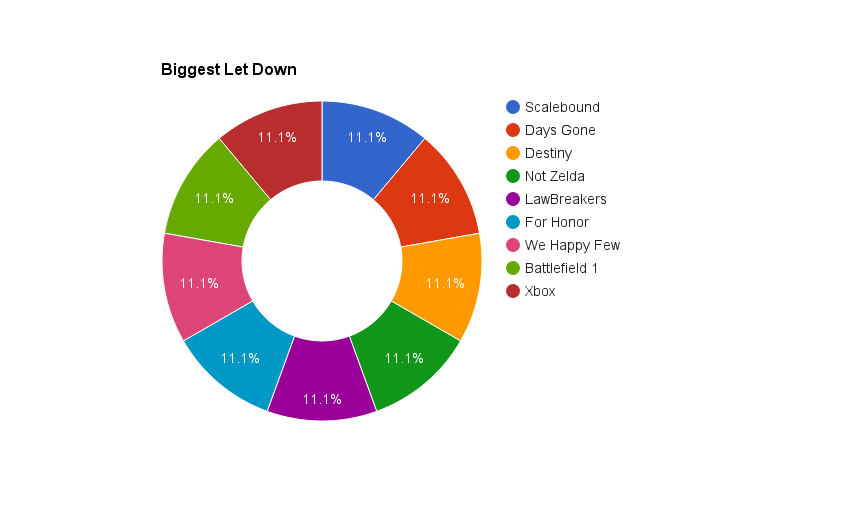 To which game would you award best of show? 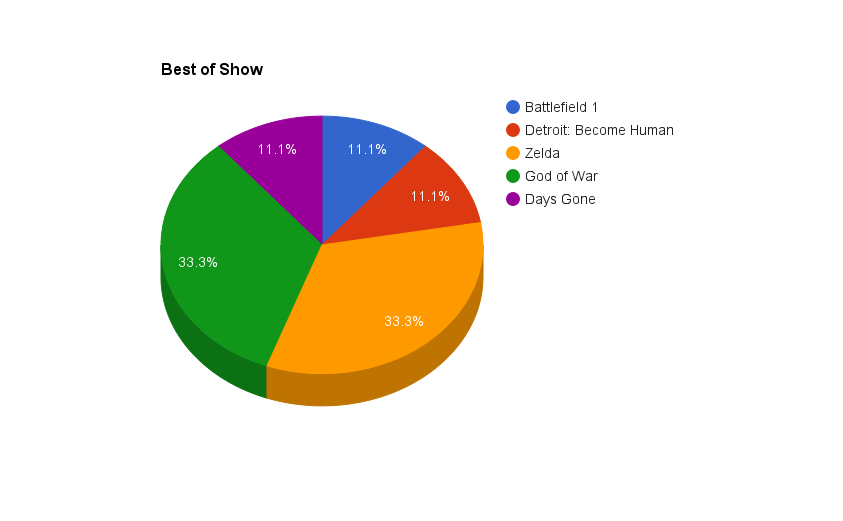 Here's a more detailed report of what each of the surveyed staff members said. We'd love to hear your thoughts as well. Please share your thoughts on E3 with us in the comments section below!

Most Anticipated: Titanfall 2
Most Surprising: Quake Champions
Biggest Let Down: LawBreakers
Best of Show: God of War
Comments: I think everyone who has a WiiU might feel a little more justified in owning it now. LoZ looks pretty cool, but I'm not ready to jump on the bandwagon. Also, it's a little weird to me that every game has to has to now have a VR version. I think making Quake Champions PC-only is a smart move.

Most Anticipated: Mass Effect
Most Surprising: Farpoint
Biggest Let Down: Destiny
Best of Show: Zelda
Comments: I didn't think I'd be as happy with Zelda as I am. I'm excited to be able to play upcoming Xbox games on my laptop with the Play Anywhere feature. Definitely saving up for Scorpio next year. I still haven't tried any VR experiences from this generation, but a few of them have caught my eye. The future is looking pretty exciting.

Most Anticipated: Sea of Thieves
Most Surprising: God of War
Biggest Let Down: Days Gone
Best of Show: Detroit: Become Human
Comments: I came away from E3 pretty excited about what the future holds for gaming. I am interested to see how VR plays out. I was really disappointed in Nintendo for having such a poor showing in terms of amount of games. Out of the two games, Zelda was the standout, but it was not enough for me to get excited about Nintendo again.

Most Anticipated: Titanfall 2
Most Surprising: Zelda
Biggest Let Down: We Happy Few - It was interesting at first but then it quickly turned dark. It's basically a drug-fueled nightmare and there is lots of profanity. This one will be a big PASS.
Best of Show: Zelda
Comments: I watched the entire Xbox keynote and am really looking forward to Project Scorpio (The One Xbox To Rule Them All). I love that Microsoft is trying to unite its Xbox with the PC gaming community.

Most Anticipated: Mass Effect: Andromeda, hands down
Most Surprising: Call of Duty: Infinite Warfare
Biggest Let Down: We Happy Few - I like mysterious, dramatic stories, even if they are dark. However from what was shown it's gone beyond dark into the realm of "Sorry, I don't like feeling this way."
Best of Show: Zelda
Comments: I didn't watch all the keynotes, but tried to catch trailers at least. I've been out of the nintendo world for a couple console cycles now, but Zelda looked engaging enough that it might be a reason to dive back in. Shocked that Call of Duty looked more halo than the recent halos. Mass Effect, as always, hits all the right dialogue trees. Kinda disappointed that there are still so many zombie games coming out.

Most Anticipated: Titanfall 2
Most Surprising: Call of Duty: Infinite Warfare
Biggest Let Down: Battlefield 1
Best of Show: God of War
Comments: Nothing really let me down this E3. The only reason I am let down by Battlefield 1 is that they are making the French Army a paid DLC when it should come with the game.

Most Anticipated: Zelda
Most Surprising: Spider-man
Biggest Let Down: Xbox
Best of Show: God of War
Comments: It was an ok showing. I dont like what Microsoft is doing, and they had no new games to show which is a bit of a let down. All the games showcased are all the same style, there was not much variety. Gwent looks awesome.

Most Anticipated: We Happy Few
Most Surprising: Call of Duty
Biggest Let Down: For Honor
Best of Show: Days Gone
Comments: I was really surprised by the new Call of Duty. Had I seen that demo and not known it was CoD, I absolutely would have said top 5 games of E3. It'll be interesting to see how Days Gone turns out, but it was a great demo. We Happy Few seems like BioShock meets 1984, and I can't wait to play it! For Honor seemed great at last year's E3, but this year I was already getting bored of the repetitive combat in the gameplay demo.

We hope you enjoyed E3 As much as we did. It looks to be a great couple of years!