I am getting very excited for Overwatch, and a month ago I wouldn't have been saying that.

Let me start by saying that I grew up in a time that will become myth to younger generations; the time before the internet. When I was in junior high school our school library received a computer with access to the internet, and we would go as classes to look up information, because that's what it was there for. In high school, we started to play more games. We played Doom, Doom 2, Warcraft, Command & Conquer; all of the classics that those my age know and love. After school in particular was always a blast, as a number of us got to hang out in the computer lab and play Doom until 5:30, when our teacher left. He didn't mind, and we loved loading into the 386's and 486's and playing and laughing and generally having a good time. 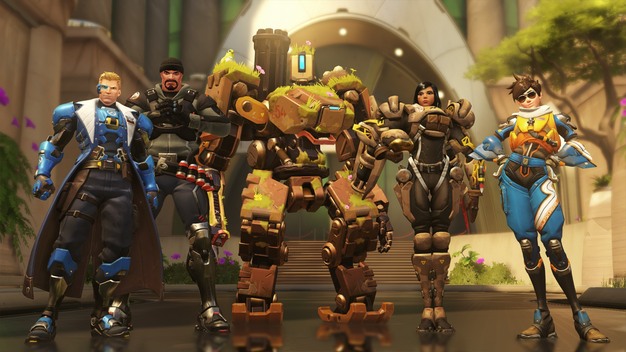 Now I am a console guy, so over the years it's only been when i've been over at a friends place that I really got to play games like Quake, Unreal___ _Tournament, Counterstrike, Team Fortress 2, etc. All of the pc shooter classics I am only kind of familiar with. Instead I had my share of Goldeneye, Halo, Timesplitters, and the like. Most recently I have dumped a ton of my time in Destiny, and have loved the teamwork aspect of the game. I generally dislike just going into PVP and grinding crucible solo, and will mostly only play when Iron Banner is on. Teamwork is something that I really like and why I like to play games other than stories.

Blizzard won me over, no doubt about it.

When I did my first couple games, I just tried the characters I thought were cool. Tried out Hanzo, and Reinhardt, and even Mercy. Then it really started to click in that I couldn't just run and gun and go for kills. There were objectives, there were roles that i needed to play, and I potentially needed to change who I was using based on who the other team was using. I played more, and tried out more characters, eventually falling in love with Junkrat and using him most of all (because he is great at taking out Bastion, who just plops down and shoots down choke points). However, as much as I love Junkrat, I know that if there is a Pharah around, then i'm swapping out, because Junkrat cannot for the life of him take down a mobile Pharah.

Seriously, this game has a lot of strategy going on.

I was basically sold on that, enjoying the teamwork aspect of the game and the different characters and roles. It really does take me back to the good old days of playing old shooters with my friends. Don't even get me started on the lore as well. The world that Blizzard has fleshed out is actually very cool, and these are a great batch of characters, that I highly recommend doing some reading up on. I also understand that some people don't like it, those being the ones that do enjoy to just sit down for some PVP and just go on 30 kill kill-streaks. That's cool, I'm not one to judge, but as for me I am definitely looking forward to the 24th and teaming up with my fellow LDSGamers and reuniting Overwatch. There's a world that needs saving!

GIVEAWAY ALERT Want to play Overwatch but don't want to spend the cash? Well you're in luck! We are currently giving away a copy of Overwatch to one lucky LDS Gamer! All you need to do is be a registered user on our Discord server and fill out a survey about our website! The winner will be notified via Discord! Complete The Survey Now!