Minecraft has consistently been one of the top selling video games since it was released. At the beginning of June 2016, Minecraft had surpassed over 100 million copies sold. In the past year, from May 2015 to May 2016, there were only two months in which Minecraft was not one of the top ten selling games according to the NPD. The NPD report tracks monthly physical sales of video games across handheld, PC, and and console games, but does not include digital sales. In 2016 alone, Minecraft has sold an average of 53,000 sales per day. So why did I shun it for so long? 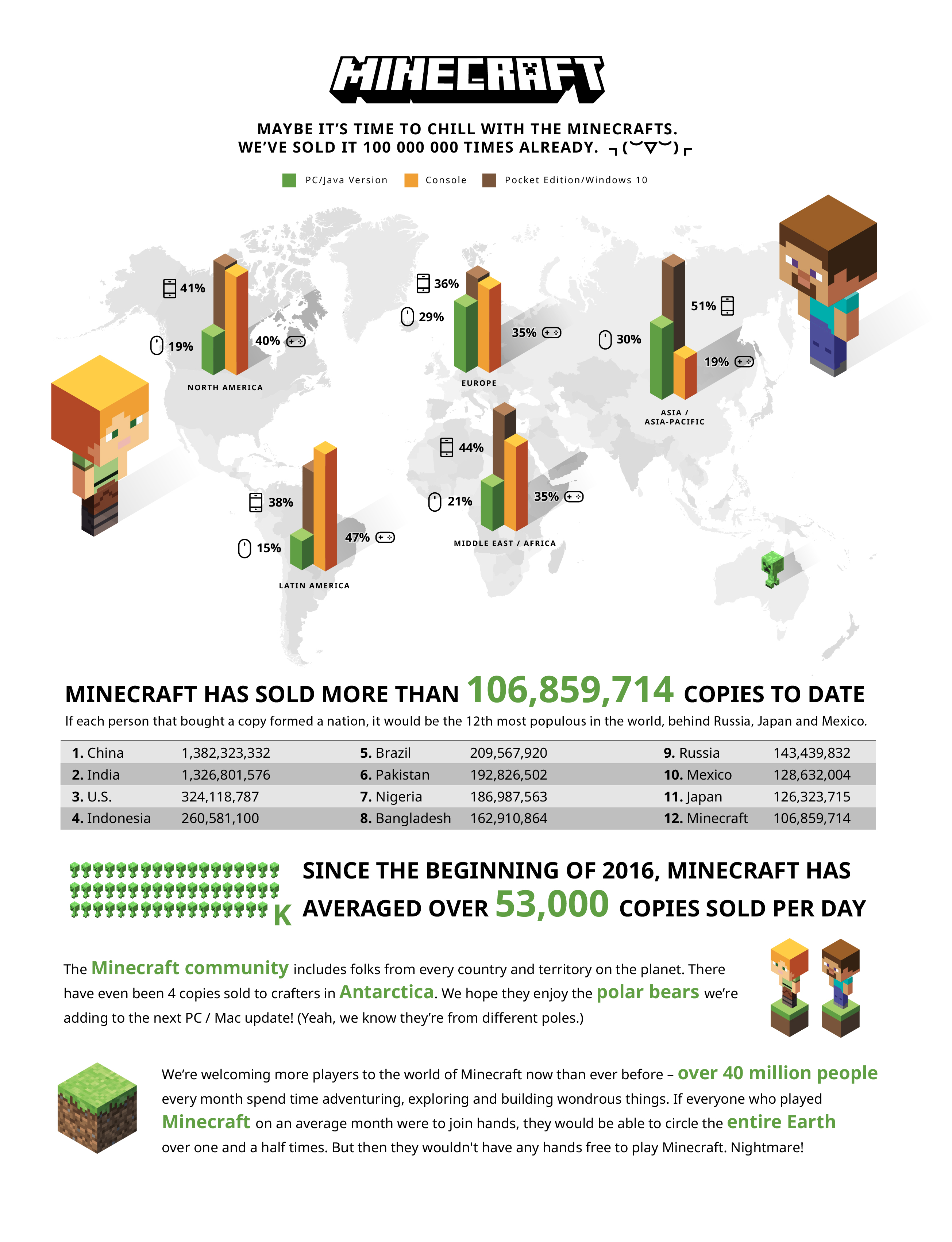 I won’t lie, I was as indifferent towards Minecraft as a person could be. I didn’t hate it, and I didn’t actively go out of my way to show any distaste towards it -- but I would be lying if I didn’t admit to putting it off as a game for children and people who sympathize with children. You might say I was a little ignorant to why it was so popular. I figured it was the “cool” game at school and that all the kids owned 3 copies of it: one for each of their devices. And don’t forget the parents who played only because they wanted to connect with their kids and show that they can be cool, too!

Alas, I became aware of my ignorance after hearing of Minecraft’s chart topping sales month after month, and hearing not only children talk about their fascination with the game but also adults, and not just adults who play with their kids or nieces and nephews, but adults who are just regular gamers like me. Regular people play Minecraft. People like me play Minecraft. Almost everyone plays Minecraft.

So I decided to try it. I decided that it was time that I should open the lid and see if the boiling pot was all that it was hyped up to be. I kept asking myself, “How could 100 million people be wrong?” Mind you, my examination is still in progress - but I must say that it has been so far, so good.

When I started playing Minecraft I saw that it was pretty plain. Previously, I had only seen quirky Twitch streams with crazy stuff going on and very advanced crafting systems that I knew would be well outside of my ability when I started, so I decided instead that I wanted a more pure, untainted experience with the low-level basics of what Minecraft is -- no cart-racing, no lava harvesting, not even creeper hunting. OK, honestly I don’t know if any of those are real things to do in Minecraft, but you get what I mean. In case you don’t, I mean that I wanted to start out with no knowledge of what or how to exist and succeed in the world of Minecraft, and to just see where things went for me or what direction I naturally went in when I started playing. I had also previously Googled something along the lines of “What do you do in Minecraft?” In my head I was thinking, “Do people really just build stuff the whole time??” The only thing I gathered from my search was that I was supposed to build a house to protect myself from “mobs” at night. Everything beyond that was open to interpretation.

I did have one other resource during my first play session: I posted on the LDSG Discord Server that I would be playing Minecraft for the first time and that people were welcome to come give me some tips while I streamed. Thankfully, my viewers weren’t overly gracious with their help, and that was a lot of what made my experience so enjoyable. I still had to figure out most of the crafting on my own. I’m not much of a puzzle-gamer, so this was just the right level for me. For instance, a viewer might have said something like, “Oh, you would benefit from having a pick to break down stone. It uses two sticks and three planks, or you could use three cobblestones to make a stronger version.” After that I would go back and experiment with how to craft tools, and I often stumbled upon how to craft other tools simply through experimentation. I made a hoe when trying to make a sword; I made carpet when trying to make a bed. Crafting turned out to be some of the most fun I had playing Minecraft, whereas it had previously been one of the things that had kept me from playing it the longest. That sentiment of dreading crafting is most likely attributed to spending hours in Destiny searching for spirit blooms and helium filaments to upgrade my weapons. That’s not how I want to spend my gaming time. Turns out it was rather painless in Minecraft as harvesting one log yields four planks, and most of the materials work similarly.

The other part of Minecraft that I found most enjoyable was the overall serene and peaceable gameplay and setting. Some of you may know that I am a very creative person. I knew Minecraft was a generally creative game, but I didn’t realize that would resonate so much with me. At the end of my three-hour play session, I was more satisfied with the time I had spent gaming for that long than I had felt in a long time. I had something to look back at and to show for my time spent playing. Beyond the castle that I had built with the help of some of my friends, I also had a deeper knowledge of the world of Minecraft and the way things work there. Not only had I learned to create things in Minecraft, I had learned to exist there.

And in short, that’s why I’m looking forward to going back to spend more time the Minecraft universe. I look forward to upgrading my little home that I made, to exploring farther into different biomes, to finding new combinations to make stronger tools, and to eventually find a way to kill those pesky creepers!

At the end of the day, I would not hesitate to encourage anyone to spend some time in the world of Minecraft. When you do, be sure to have a reasonable chunk of time ready to give to your first experience there; ten minutes is not enough. And most importantly, take someone along for the ride. It is good to have a guide, but you will benefit the most from someone who does more than gives you the recipe... someone who will show you how to make your own recipes. Now I am no longer wondering what do people do in Minecraft. I am now only wondering what I will do next in Minecraft. 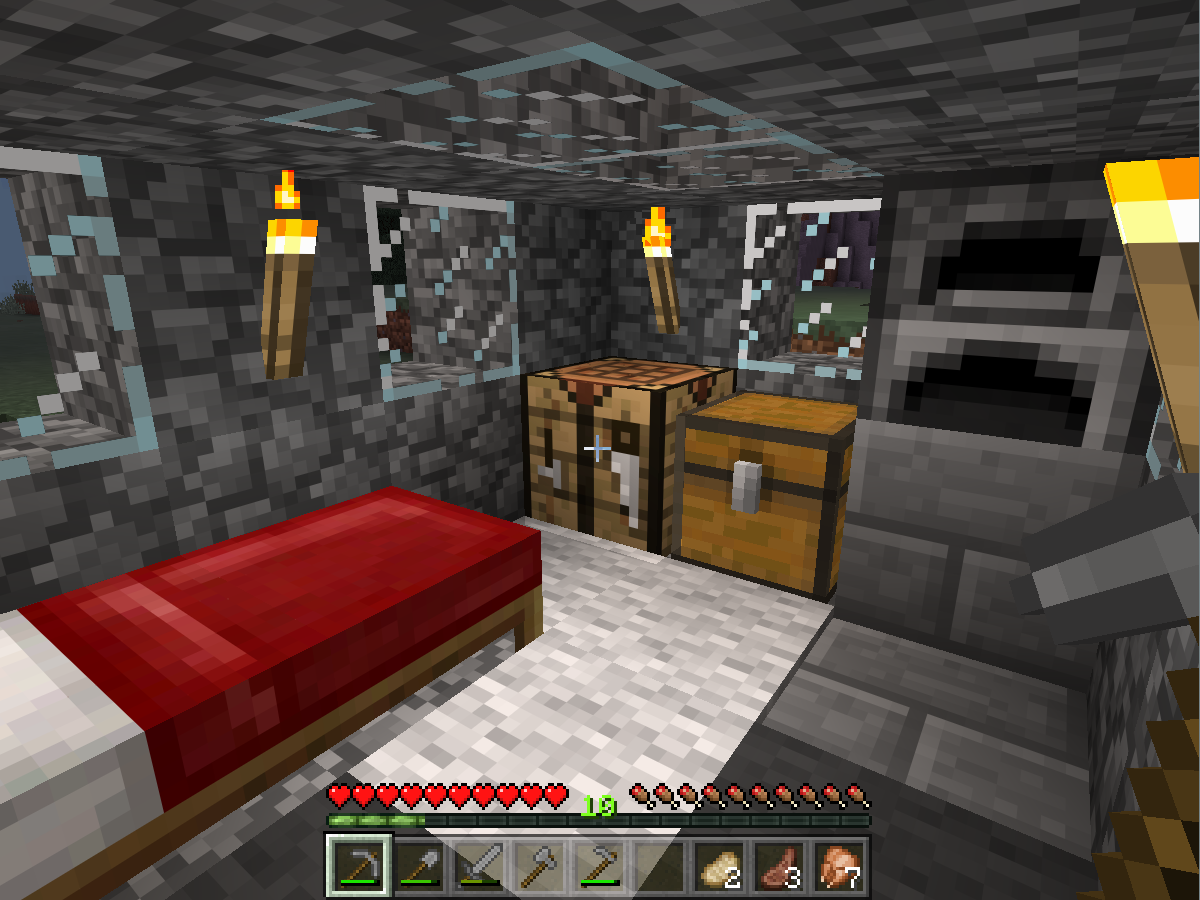 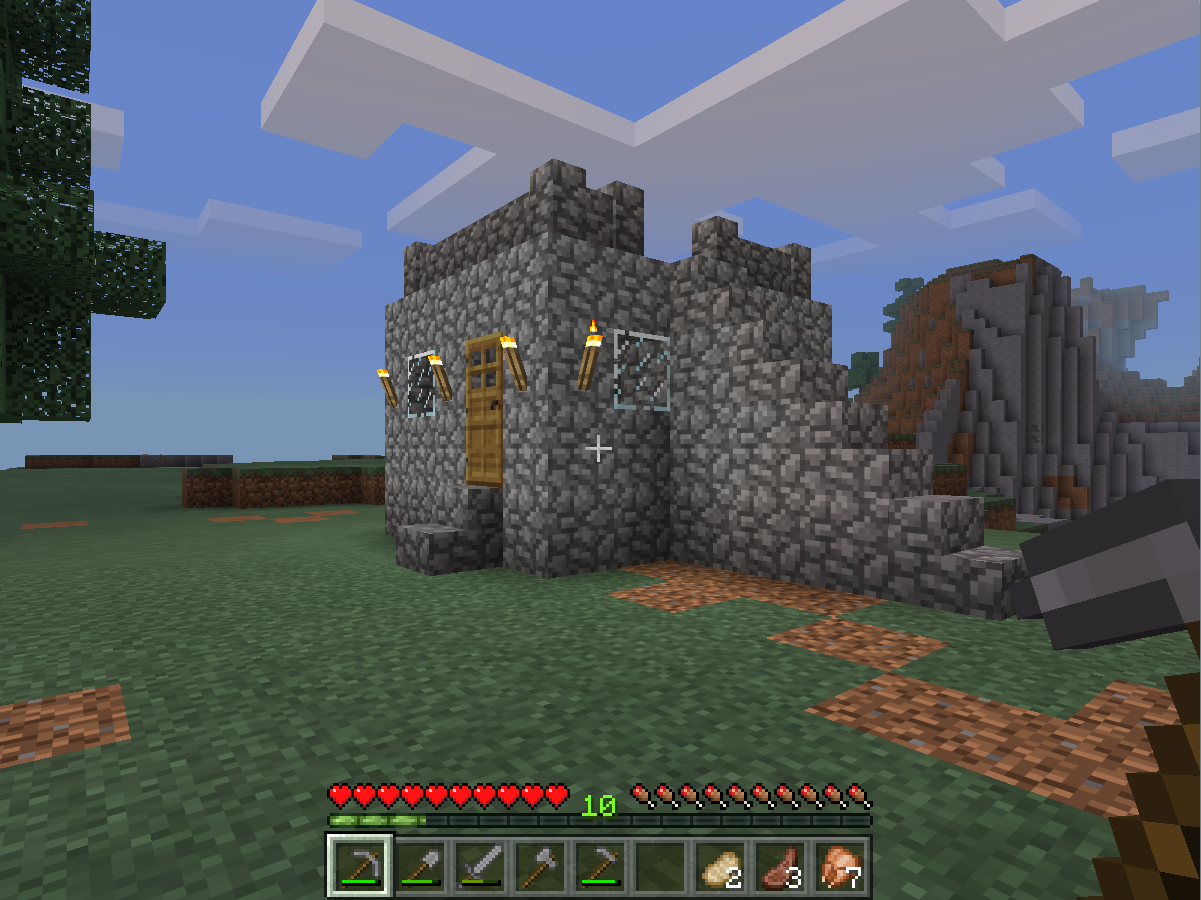 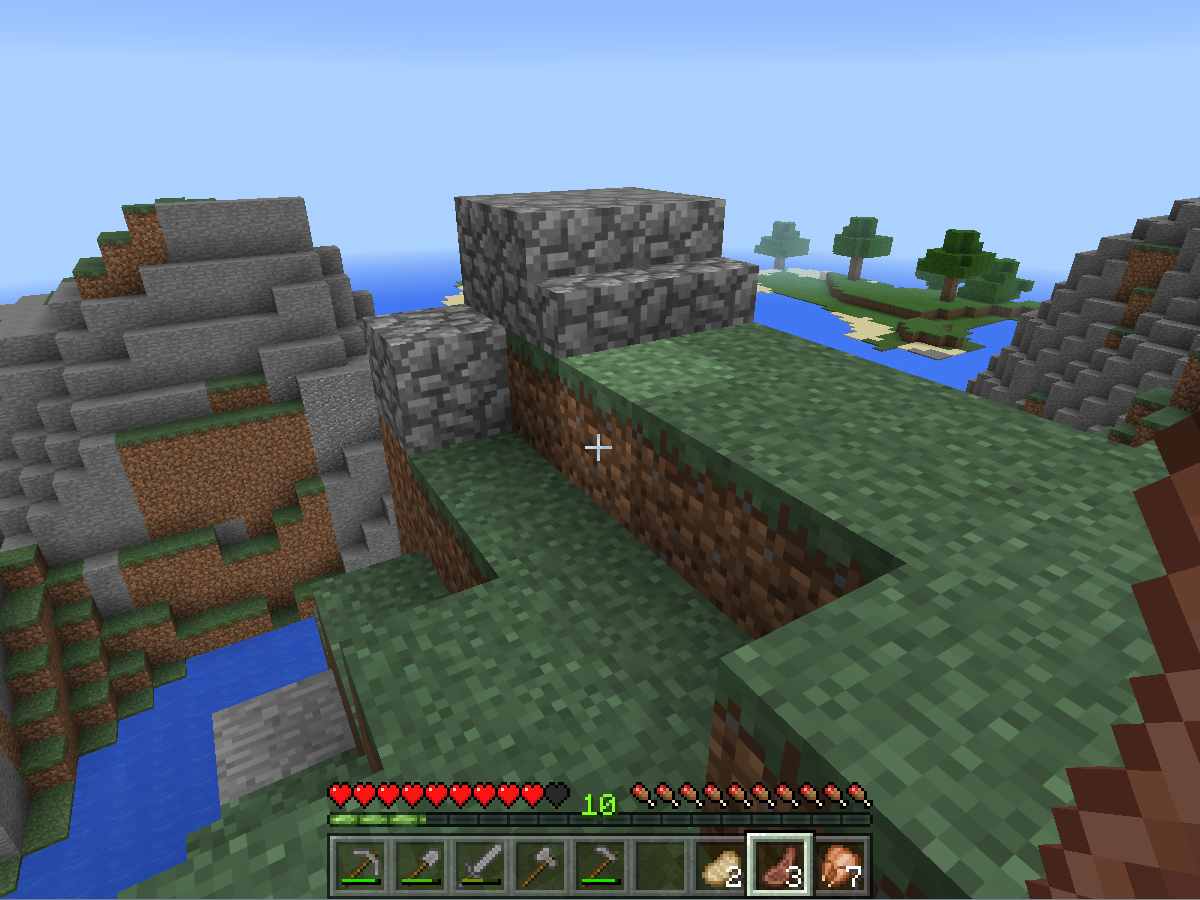 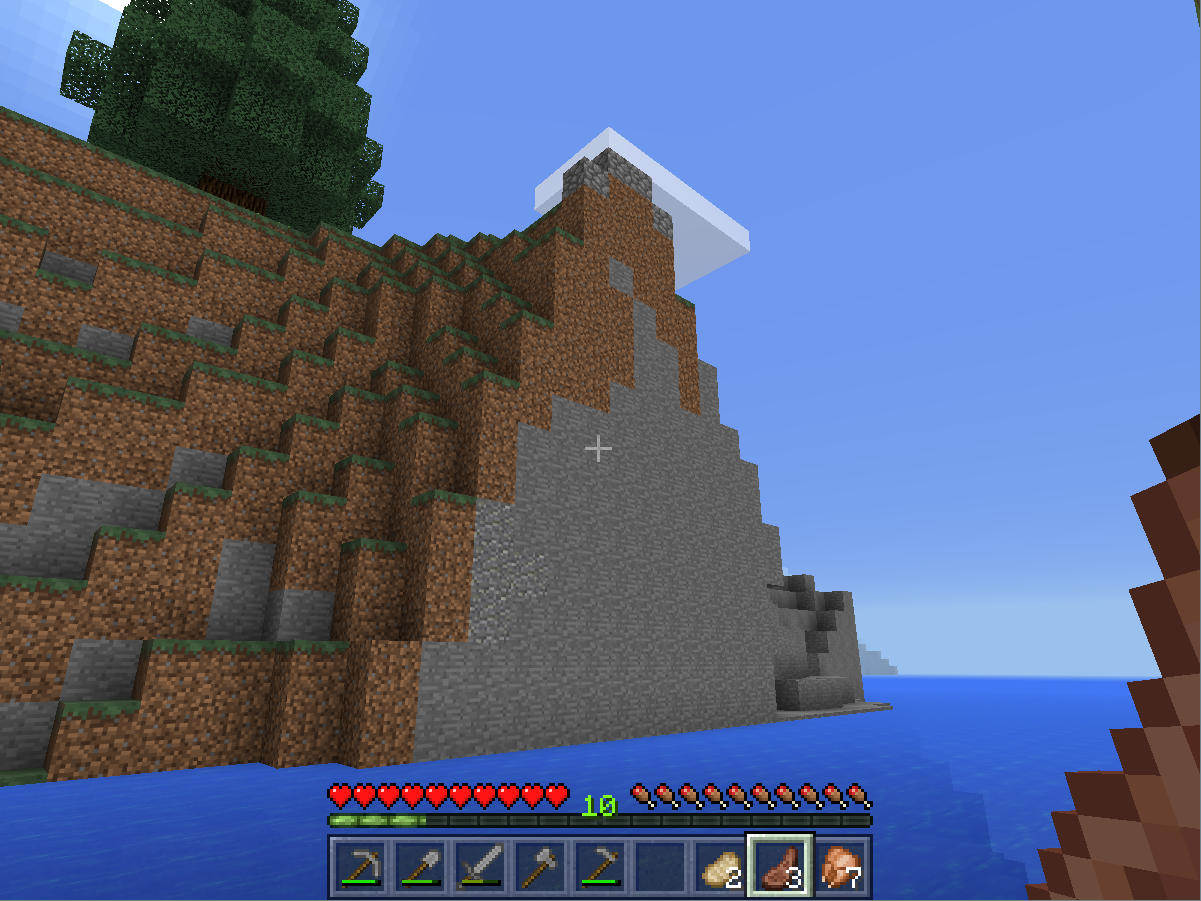 The above images are screenshot's taken at the end of my first three hours of playing Minecraft. I think I'm most proud of my diving platform! :)

To see a video of my first 3 hours playing Minecraft, click here.